22 replies to this topic

Hey guys, this is the first marine tank in this house so decided to make a journal for it just now. Below you can read a bit of info on setting up and what brings us to the current moment / state of the tank.

4x2x2 - This tank is technically my mums tank, so I'm sort of writing this part of the journal on her behalf. Ok ok, it is her tank. I however have been helping setup and design the aquascape - Hope you like it.

This tank has been a downgrade (really an upgrade) from my mums fully planted 6x2x2. A few things from that "old" 6x2x2 have gone into my own 6x2x2 - Specifically the CO2, some plants and eventually some fish.

Sorry for the lack of progress photos, skip to bottom if you're just here for photos

The tank itself is a Waterbox 135.4 which was bought from Aquarium Gallery Perth in Wangara. This is a really nice ultra clear tank which is fully decked out for saltwater - Comes with a good sized sump, super nice cabinet, auto top off, weir + plumbing. Even had it delivered and assembled by some guys, awesome! Would probably make a super nice planted tank too.

The tank arrived about a month ago and was sitting while we planned, moved it about and decided on the best place to put it. We eventually decided to place it in the corner between couches, as it didn't make a reflection on the tv too much there...

It was really mainly put there as there was plenty of space round the cabinet hehe.

When moved to the correct spot we realised we were going to have to move it again - There was a large brown patch of paint where the 6x2x2 used to be, from when the house got repainted and we couldn't move the tank haha. The wall was repainted and the tank finally moved to its final position. Then we were ready for equipment and aquascaping materials. We managed to get nearly everything in one deal from somebody shutting down 3 tanks (all marine!). We got a shit ton of dry rock, a Bubble Magus 220cs, a Reef Octopus reactor, heater, IBC & pump + 150l of salt water and a RODI unit. IBC was placed down the side of the house but is nearly in line with the tank, so we can put a hose through a window and pump water straight to the tank. We also got some aragonite sand and some more rock from a guy nearby, and a Tunze return pump also from AGP.

From there, as you could imagine, we put the sand in, filled the tank partially and invented some different aquascapes. The general idea for the aquascapes was to make 2 "piles" of rocks, one larger than the other. The IBC was later fully filled with salt water later and we filled the tank + sump. What followed was a lot of frustration (and excitement) today, while getting our first sump properly working. Eventually it was all done and working silently, though we are still having a bit of trouble with the ATO. Finally being done I was well and truly happy to mess around for the rest of today's afternoon scaping.

Though not totally happy with the current scape, mum and I really like the general shape:

That catches us up to now - Everything is running, scape looks good (or so we think

) and all that is now needed is some T5 globes, or a new light unit.

Hope you enjoyed reading, not the most exciting read I'm sure, but it leads us to the current moment. Keep an eye out for further journal updates

PS Could someone please move this to marine section... accidentally posted it in wrong place.

Nice setup. Tank would look mad with some oddballs in it

Another one gone to the darkside :-)

Looks good... What's the plan from here on?

Next up we'll be needing some live rock to seed the tank to help cycle it. Also need to hang a light from above the tank, which is a 6xT5ho from the 6ft planted tank.

Mum wants my 6ft's metal halide for it though, has some blue globes in it at the moment too

Not going to LEDs? Just curious as have been changing the t5ho bulbs every 9 months or so (on a planted tank). The cost is a bit but I like the bulb spectrum. Never used metal halides though.

Metal halides are on the same sort of boat, have to replace the lamps annually. I would have gotten an LED for my tank myself (the one the halide is actually going on) but the halide was cheap when I bought it.

LEDS are definitely an option on the 4x2x2, however the initial cost is a big factor. It does look like LED's in the long run would be cheaper considering the T5ho's can be $40 a pop to replace, depending on the globes

Metal halides also chew the power and give off quite a lot of heat , can pick up led for that size tank reasonably cheap off gumtree

Yes, every time I replace the bulbs I think LEDs but have also cooked a few boxes under the tank hood as well

That interesting on replacement time frame - sounds pretty similar. I started doing a par decay chart by month but plants are taking up all the convenient spots to sit the meter.

Got the last 2 things we really need for the tank at the moment over the last week or so:

Picked up a bunch of live rock from the Fish Doctor last week. It's covered in pink and purple coralline algae which looks pretty cool. Just stuck it around the tank in random spots for now, as the liverock will seed the tank as I understand. Eventually it will probably be moved to the sump. There is now also a prawn sitting in the bottom of the tank going fuzzy

Today we also bought 2 lights for the tank. 2 MarsAqua dimmable "Full Spectrum" LEDs, 165w I believe. Nice lights which are very bright. Would attach a photo but the first thing that needs to be attached is them to the roof.

Since we're using them and not the T5ho's they're for sale, PM me if interested. $250 for both ono.

Also put 2 wave-makers on either side of the tank to get some flow behind the rock formations. They're doing the job well but one needs to be readjusted as there is a large hole at the front of the tank lol. Plenty of flow in there now for sure.

Now that we have everything really required for the tank we just need to cycle. Yipee! The wait begins....

Cycling a marine tank can be a bit of a funny business! Filters are predictable... Live rock, not so much... Slowly, slowly... But not too slowly cause I can't wait to see what you guys do with it.

Haha thanks MM. Slowly figuring that out atm.

Yesterday we hung the MarsAqua LED's from the roof. They look great and cause a bit of a shimmer effect in the tank. At the moment we have them at the lowest settings and will slowly turn them up as we go. Eventually we're planning on getting a power socket put in the roof, but at the moment they're just linked together and connected to an extension board. Here are some photos:

As you can see, each light has two power cords. One of these is for the blue lights, while the other is for all of the other colours. With these lights you can adjust how much blue and how much of the other colours you want with a little knob which is on top of the light. There is also two "sockets" on each light which allows us to connect one light to the other, meaning that we only have to plug in 2 cords to the power board rather than 4.

There is also a tiny bit of sponge growing on some of the live rock we bought - Cool!

On the other hand, we also have a small damselfish in the tank already. Sort of. It is currently in there as we started testing the water parameters and picked up no ammonia or nitrite, but 25 nitrates. I believe this is because we have enough liverock in there to convert the prawn's ammonia. The other rock is also hopefully partially seeded.

The damselfish itself is pretty cute... Apparently they're assholes though, so he's staying in his jail until the tank is 100% ready for livestock. He will then be going back to the fish doctor. Will attach some better, cuter photos of him later

That pretty much wraps it up for this update, so here are some full tank shots to finish up:

Tank is looking good! What’s next for it?? Good idea on hanging the lights. I cooked one under the hood even with fans.

Hope we see you at the next meeting Keelan? Marine Aquariums.

A couple of days ago we got 4 Trochus snails and 5 Hermit crabs...

On Friday arvo went to collect 2 sea urchins and 2 starfish, except she came back with a little more than expected. Not against it however, the clownies are soo cute

In the above photos there should be:

Haven't got any photos but it looks as if the tank is currently going through the "new tank" stage. Diatoms all over the rock and sand. Not too bad but doesn't look too great either. Glad to see it though, validates that the tank is mostly cycled.

Will put some better photos on at a later date

Is this tank still running? Was starting to come together in those photos, cool clowns.

It is indeed still running, forgot about the journal however. Thanks for the reminder haha, new update up soon.

Sounds good. Do you find the snails and hermit crabs actually help out with cleaning the algae and sand bed much?

Been a while since I updated this, here are some update photos:

IMG_1925.JPG   104.21KB   2 downloads
As you can see there’s a new light on the tank.. my Metal Halide which was on my 6x2x2. Managed to fix the side which wasnt working and put 2x 14,000k globes in. Not as blue as it looks in the photos but looks fantastic.
Actinic fluros make the fluros really pop too 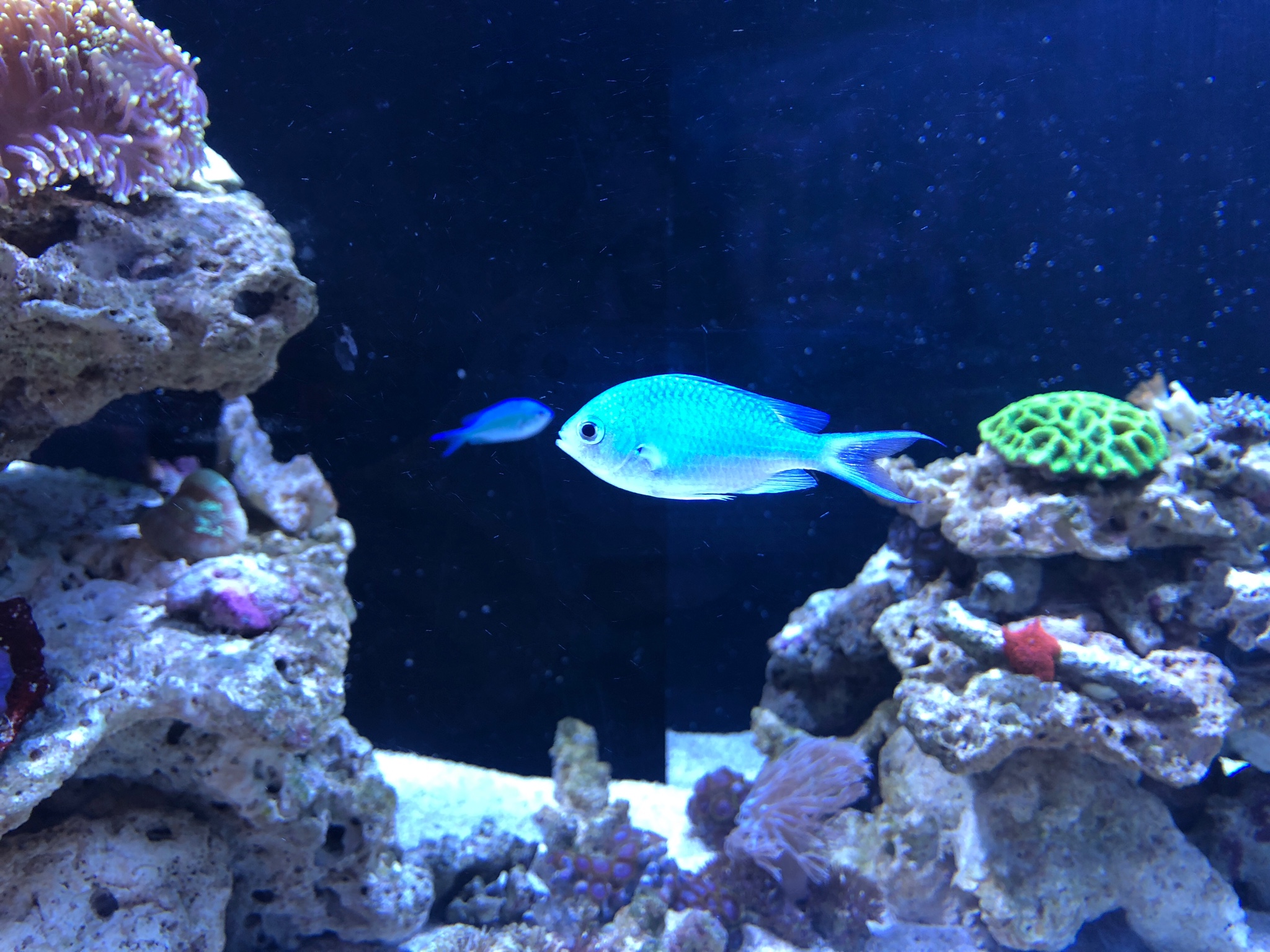 Some new fish - Cardinals, Blue Chromis, A Bi-Coloured Blenny 2 Wrasse and one of my all time favourite fish - a Butis Butis
Unfortunately the collector urchin dropped all of his spines and died ☹️ unsure why
Got some new corals too. Not exactly sure of all the names but here are a few:
Pulsing Xenia
Mushrooms
Torch
Hammer
Bubble Tip Anemone
Just the ones that I know of names in there

IMG_1919.JPG   171.42KB   2 downloads
The tank has progressed heaps, I personally think it looks fantastic. Been a few rescaped here and there to get it looking a bit cleaner, really like the hardscape now

Back to Marine Discussion, Photos & Journals

Also tagged with one or more of these keywords: Marine, Australian, Native

0 user(s) are reading this topic