15 replies to this topic

Chosen theme: Kakadu inspired tank. Yet to decide which river catchment if I decide to get that serious

Picked up my new tank today, but unfortunately my camera isn't charged. This tank is going to be a Northern Australian native tank again, but hopefully this time it will be more accurate and changed less.. can't really change a 3D background. I have some new and better fish too. Will get some photos up soon

Fish have been moved to the 6x2x2.

As substrate I am using white Bunnings play sand, with brown Carnarvon river sand mixed in. There are some small rocks mixed in too. I am planning on making a 3d background to replicate something like the photo underneath, using peat moss and foam. Photo is from a video on youtube, in a river in Kakadu (my biotope location). I will be using the logs in my tank too, as well as some large rocks as a bit of a base. No proper scape atm as tranferring the fish, water, logs etc took a while.

Fish that I have for the tank are 1x Coal Grunter, 1x Neosilurus Ater, 1x Sleepy cod and 2x Silver Scats.. My Butis Butis is also in the 6x2x2 at the moment but he will eventually have to move as the Sleepy will most likely eventually eat him.

I hope to see some more journals guys, get on to it!

Probably went overboard with photos for no amazing reason

Only got him yesterday so he's still a bit shy and not eating just yet. 3D background hasn't been started yet as I need a little more foam, but it's getting there

Hopefully on my next update I'll be getting it started

Used up my money for the background on these little guys, simply couldnt resist. Barred Grunters. Unfortunately they look like they may be in need of a worming (Sunken belly and skinny). Heres some photos:

Added the Coal Grunter which I've been growing up in another tank last Friday!

Still happily swimming around and giving the other Grunters an occasional peck, even though he's the smallest fish in the tank

Unfortunately he has gone lighter on the white sand so his colours aren't as great as before. Even more exciting, I got 2 JUVENILE Neosilurus Hyrtlii! Were a little too small to go in the big tank so they're currently chilling in another tank. Hoping to get them in the biotope tank soon

Hopefully I'll get some photos soon as well

Photos of the Coal Grunter:

N. Hyrtlii don't stop moving so unfortunately I can't get any photos

They're really cute, can't wait for them to grow a little larger and go in the comp tank.

Today, I made a start to the background!

All I've done for now is cut the 4ft sheets so that they suit the size of the tank, and made a rough outline of the shape. I forgot all about sticking the foam together for carving so didn't get to doing that today.

The parts that stick out will have logs to look something similar to where a pandanus palm is growing out of the bank. At the moment it doesn't look like there will be much space left in the tank, but I will be carving it out so that there will be more swimming space than it seems. The side of the line that says background is the background..

I started doing some carving on Sunday with a hand saw. Was only very rough carving, to take out the large unnecessary pieces so that I could get to detailed carving with an electric tool. Unfortunately I didn't get any photos, as I was pretty tired after a big day (due to it being fathers day)

Today I did more carving. I carved using a reciprocating saw, as doing so made the carving much quicker and easier, though I did manage to cut myself haha. I have cut it so that it curves inwards a bit, so that there is still enough room for the fish to swim and turn around within. I need do some smoothing using a dremel and a knife, as at the moment it looks more like a rocky ledge, rather than a drop off under a plant / tree. And yes, the flat area still needs to be carved

Got another filter as a very nice early birthday present (Thanks Mum haha!!) An AquaOne Nautilus 2700

Tank looks clearer, and I'm liking having more flow through the tank.

Went on a fish shop run today and managed to get 12 bags of peat moss from Pet Magic (3.6kg). Have also carved a couple of holes in the top of the background for driftwood to stick out of.

For the last couple of days quite a bit has happened - First of all I've finished carving and smoothing the background. Have carved the caves in the bottom for the Sleepy Cod, the Neos and anyone else that feels like hiding in there. Have also carved a hole in the top of the background for wood to stick out of. - Here are some photos

These are the caves from under the background. (Left side cave)

I've also sold my 2 Scats as I've wanted to plant the tank for a while. My Mum is replanting her tank so I inherited a bucketful of Vallisneria Nana

Sad sale but having plants looks pretty good. Also bought a nice piece of driftwood from Aquarium Gallery Perth. Anyway, here are some more photos of the plants, and the fish. The Neosilurus After doesn't often line up straight with the glass with me around so I took the opportunity to measure (and take a photo). Neo is 35cm. Not the greatest photos, but here they are

Some photos of the Barred Grunters. They look really nice with the plants and seem less skittish already. Have caught them comping on the Vallisneria a little though

Final photo of the tank.. Doesn't look that great without a background, but not going to bother with getting one - Background is getting closer and closer to getting finished. Sorry for using so many photos, seems I do that a lot

So I just got back from a holiday to depressing looking tank. The only remaining bits of Vallisneria were uprooted and half chewed, though the Barred Grunters seemed very happy with themselves. The diatoms algae which I've been struggling with for a while also finally got to me. I believe the sand may be the problem as I've seen a few articles about it causing diatoms. Even if it isn't causing it, good excuse to switch to a more natural looking sand.

Tank with most of the sand taken out.

While on holiday I found 4 or 5 really nice bits of wood. Currently cleaning and soaking them, but I'm pretty sure I'm going to use 1 of them as the piece in the tank. The tank won't have a background in it anytime soon.. It's no where near finished.

So the comp has ended! Big thanks to the PCS for running it both times. It was lots of fun and it was great to see the awesome looking tanks everyone had. Sucks that I ended mine with a bare tank, but I'm going to be much happier with it all in the long run. The sand is much nicer looking and the wood looks awesome. So heres a cloudy photo of the tank atm.

That's all for now. Good luck to all of the other contestants!

So recently I got some Vallisneria Americana for my tank. The leaves are an inch wide at the widest point which I thought was pretty cool. It's 4ft long too. Anyway, I have 4 plants which I've placed on the right behind the driftwood. It looks pretty good although it doesn't in the photo. I think this is because I need a background of some sort for the tank as the colour of the wall behind it looks a yucky yellow colour thanks to the tannins.

Got beaten up sadly

- Sold my Barred Grunters just today. Sad sale but were too energetic for my other fish - Were constantly disturbing and angering my Neo and cod who just want to sit around and sleep.

- Put a black background on my tank. Looks way better imo. May notice in the photos a bit of algae. Thankfully it is disappearing.

Anyway, here are some photos of the tank from the last week or so.

- Fish have grown. Sleepy Cod is now 24cm. Coal Grunter is about 13cm. Neosilurus Ater is still at about 35cm. The Barred Grunters had grown quite a bit before I got rid of them too.

Going to just keep these 3 for a while now as I'm a bit tired of trying to find suitable tankmates for everything.

Apologies for the murkiness in the whole tank shot, had to put more sand in in order to bury the Vallisneria properly but wanted to take a photo nonetheless. 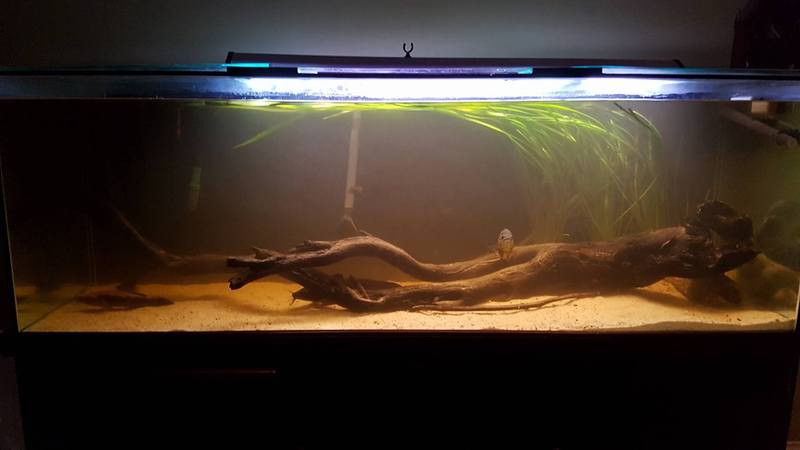 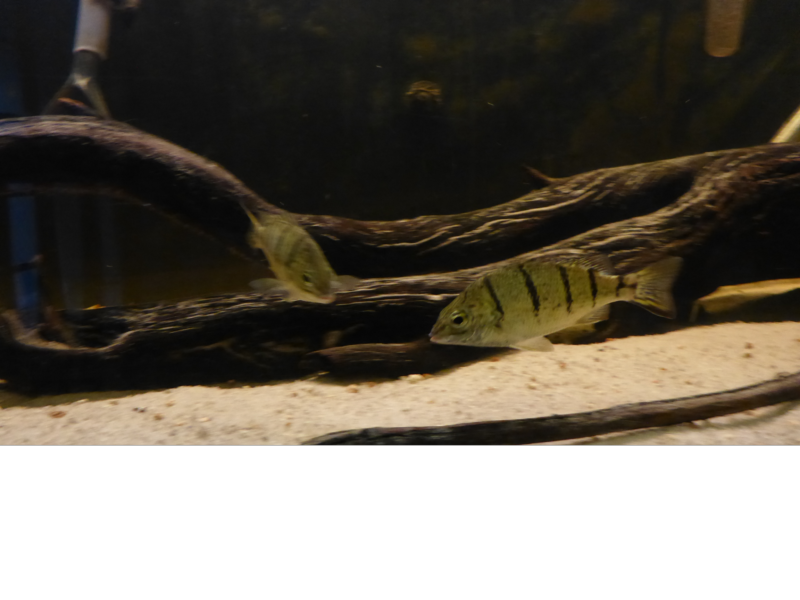 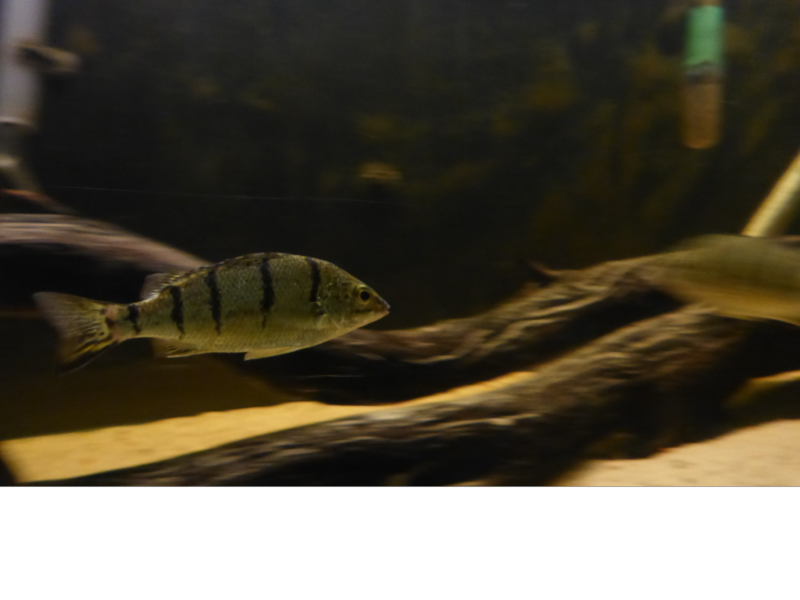 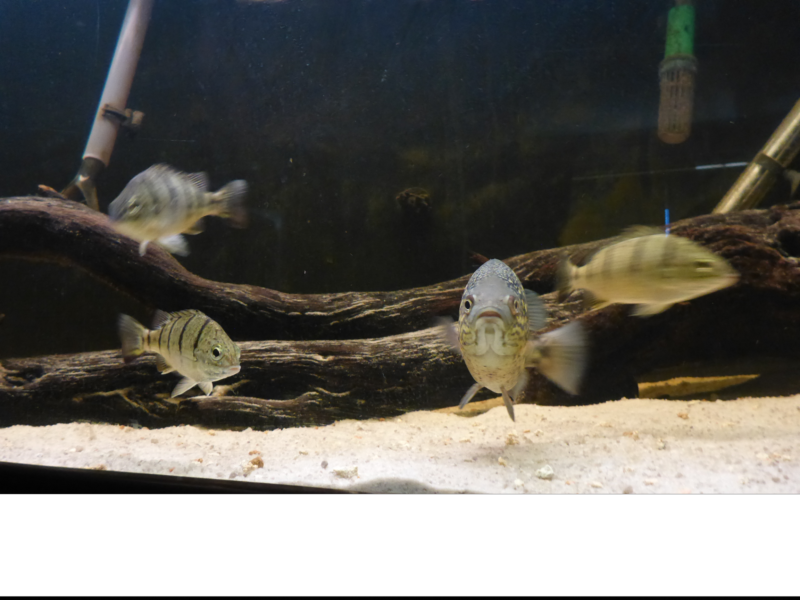 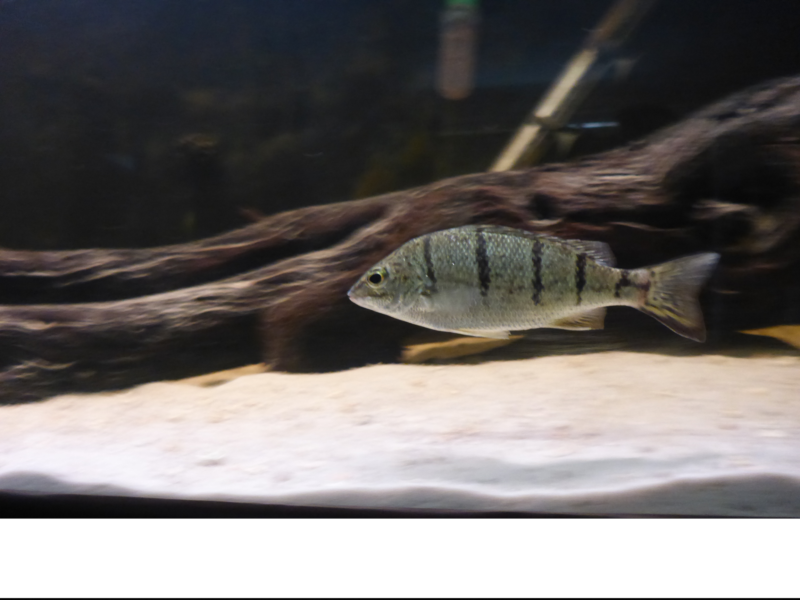 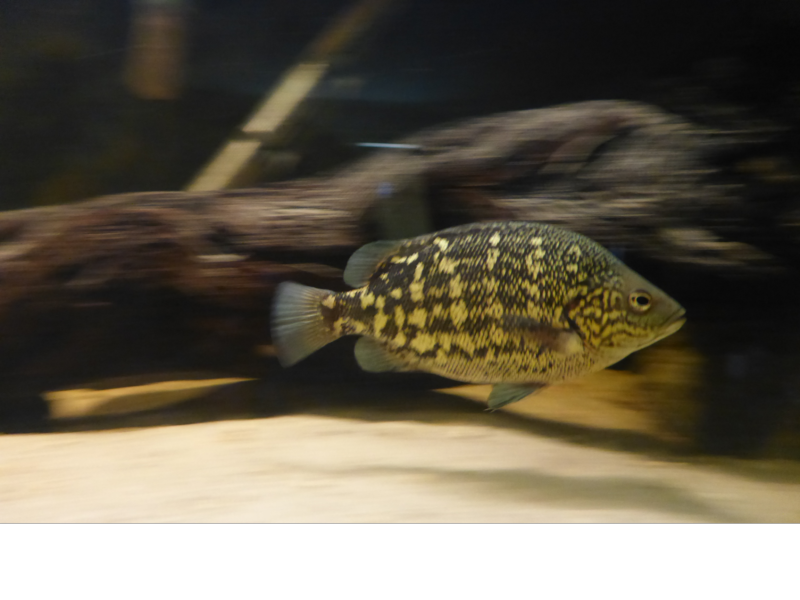 So been a while since my last update. Had just the one piece of wood for a while and nothing else, but thanks to a tank shutdown I inherited the Co2 and Hydrocotyle tripartita. Added the rocks at first to keep the hydrocotyle on the ground, but then I realised that it looked quite good so I added more. Someone with good eyes may notice that they're the same rocks which I used in my 6x1.5x1.5. Wish I had more, they're really nice rocks.

Apologies for the bad photos, window across the room makes an annoying reflection.

Just realised that I'm always complaining or apologising about my own terrible photos.. I think I need to save up for some thick curtains and a dslr

Also still just have the Coal Grunter, Sleepy Cod and Neo in there.. Sleepy is getting big, must be about the 28cm mark now.

My Coal Grunter still has really blue fins. Bluer than they look in the crappy photo below, but it still shows the colour pretty well.

Still have some fish in a grow-out 3ft too, which are nearly ready to go in the tank. Hyrtl's and a Sooty Grunter.

I'm intending on adding a heap more plants to the right side of the tank behind the Hydrocotyle, mainly some bushy stem plants which wont mind being tied to egg crate.

I guess you will see what I have done on my next, well timed update

why are u selling!?


Sent from my iPhone using Tapatalk

Back to Aquascaping - Tank Journal