Fish Of The Month February

5 replies to this topic

For the month of February we will be doing two Fish of the Month profiles and auction lots given we have no club meeting in January. We have been very fortunate to procure two very rare and sought after species, kindly donated by humbug (Kathy). These will be auctioned off at the February auction and will be very hard to source elsewhere. So turn up and bid hard for these amazing fishes. As always 100% of the proceeds for FIsh of the Month lots are donated to the Stuart Grant fund.

Fish of the Month profile: Exochochromis anagenys - also called the Three-spot torpedo cichlid is a fantastic addition to any Malawi predator tank. Not a common species in the hobby, this predator can exhibit distinctive feeding behaviour and colouration in the aquarium, helping it to stand out amongst other predatory Malawi cichlid species

In the wild, specimens up to 30cm can be found, however in an aquarium environment, maximum sizes of 25cm for males and 20cm for females are more typical

Endemic to Lake Malawi. It has a lakewide distribution and occurs mainly in the sediment free intermediate rocky habitat, cruising above rocks

A 6x2x2 would be the minimum size that these fish should be kept in at adult size. However, it is strongly recommended to keep these fish in larger tanks. Provide plenty of open swimming area but allow for several rocky structures to provide refuge for females and sub-dominant males when they require it

The Three-spot torpedo is a typically placid fish which can be prone to losing condition when kept with more boisterous fishes, especially juvenile specimens. It is predatory however and will potentially try to consume any fish that it thinks it can fit in its mouth. Three-spot torpedoes will commonly be seen out in the open in an aquarium, hovering about or cruising around the tank and are not known for being skittish.

In the wild, the three-spot torpedo can typically be seen cruising at relatively high speeds a meter or so above the rocks, occasionally launching at an mbuna with a sideways action of its jaws, not dissimilar to another well known Malawi predator, A. christyi.

When spawning in the aquarium, the three-spot torpedo will become territorial and sometimes dig a shallow spawning pit. Dominant males develop a blue colouration, whereas females remain a golden or yellow colour. In the wild it is noted that females and sub-dominant males are more of a silver colour in the southern parts of the lake, suggesting specimens currently available in the hobby are derived from northern populations as they retain that golden colouration. Brood size averages around 80 for well-conditioned mature adults.

The Three-spot torpedo is a must have for fans of Malawi predatory cichlids. It offers a different colouration from other predatory malawis with the golden yellow colour, stands out in a community tank and is relatively easy to keep once established. As a rarity in the local hobby, the three-spot torpedo can demand a high price but nonetheless offers great value for money as they are fantastic additions to any cichlid collection. 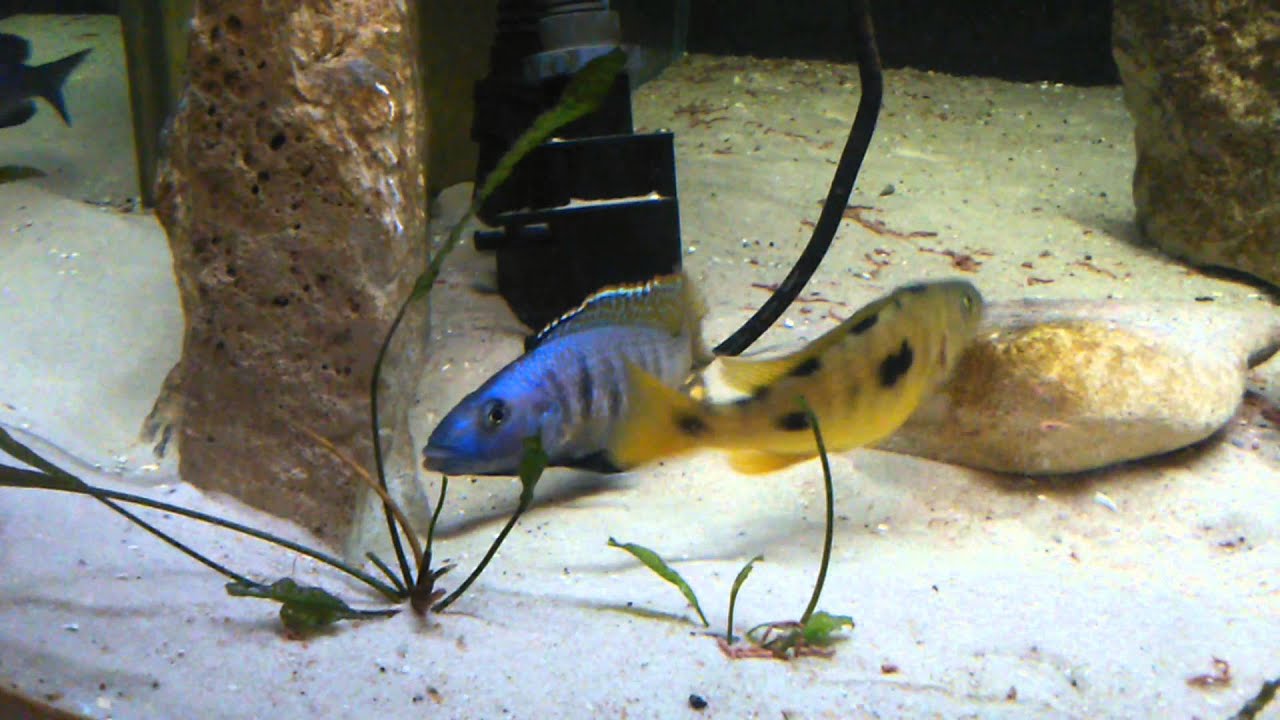 Photos are taken from Google.

There will be 10 of these available for grab at the auction!! Two lots of 5

Such a good list of cichlids at the auction, Spewing I wont be there.

I know we've had silver torpedos here in the past (Az you had some at midland?) but I don't recall seeing the 3 spots here in Perth in recent years?

Yep I sure did, They were Otopharnyx sp. "Silver Torpedo" very similar to the Otopharnyx lithobates. They were an awesome species that never really caught on. Would love to see them here again as well.

I did get some Exochochromis anagenys in once from Norm Hailwell (Riverside Aquariums), but they were very small and were ordered in for someone. Not sure what happened to them. I remember them being very expensive around $100 each.